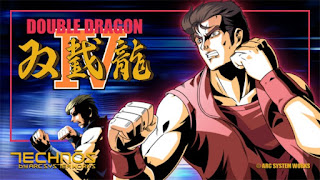 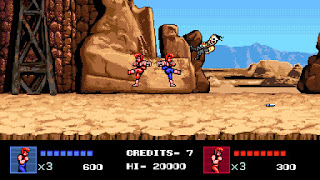 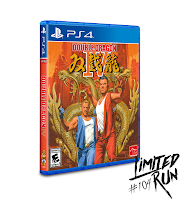 Though it has been out for about a year, I only recently purchased the game thanks to a physical release through Limited Run Games. If you have never heard of them, don't worry, you will soon. They have developed a bit of a cult following for the care they take in releasing physical copies of select digital only console games. It's certainly a cool concept and I can't wait to see what they have on the horizon. My copy of Double Dragon IV has reversible cover art and the limited edition came in a big NES cartridge style box and dust sleeve. Cool touches for such a cool looking package.

Will Double Dragon IV return the series to ubiquitous gaming status like the series' earliest entries some thirty years ago? I doubt it, as gaming has gone from punching folks in the face to shooting them, but rest assured that titles like this one will continue to keep the fight going for years to come.
Posted by Justin LaGrande at 9:08 AM 2 comments: