Bulletstorm: Controversy Not Only Sells, But It's Fun Too 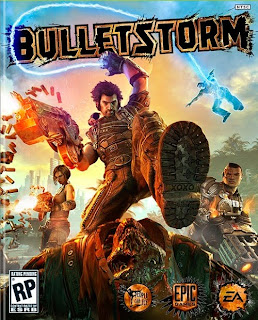 In the 1990s, Duke Nukem 3D changed the attitude in video games forever, and for better or worse, gamers ate it up. Ever since, though, the video game industry has been fighting against negative depictions of its collective work in pretty much all walks of life. In response to these allegations that video games have essentially corrupted the youth of America, a ratings system was instituted and enforced, and developers just seemed to step away from certain content being in their games. That was the case at least until the last system generation, which saw developers constantly push the envelope as far as content is concerned, which brings us to today. The latest effort by Epic Games has proven to be not only a great first person shooter, but it also finds itself on the short list for contenders in the category of most controversial game ever.

Bulletstorm places players in the role of Grayson Hunt, leader of an exiled military unit who decides to take one last shot at the man who put a bounty on their heads, General Sorrano. That shot doesn't go as planned and Hunt ends up on a strange planet populated by all manner of mutated beings. Hunt isn't alone though, and is accompanied initially by Ishi, his formerly trusted friend, who is having a bit of a situation. Thankfully, players have a good variety of upgradeable weapons to help them fight through the seemingly endless waves of enemies that stand in the way of your revenge. weapon upgrades are handled via a point system that awards players for killing enemies in unique ways. If an enemy is far away, you can kick an explosive barrel at them and shot it to blow them up. If an enemy is near a spiked barrier, simply kick them onto said barrier. If a group of enemies is clustered together, fire a flail grenade at one and detonate it, bonus points abound. It can be a very fun, and at times quite gruesome affair. This is one of the controversial aspects of Bulletstorm, as critics of violent content in games contend that rewarding gamers for sadistic kills is sending an improper message to younger gamers that play it. they also complain about the use of explicit language in the game, but all of these things are noted on the games "M" rating. Pretty much every video game retailer in the US strictly adheres to the rating system and won't sell "M" rated games to kids under 17. If a parent or other adult buys a game with mature content for a child, that is a fail on the part of that adult, it is not the responsibility of a developer or publisher.

Back to the actual game, though. Bulletstorm is a great experience as far as the single player campaign goes. The story is engaging, controls are tight, and the graphics are pretty good considering this isn't a huge budget annual IP. As a matter of fact, this game may sell more units simply because of the Gears of War 3 beta attached to the special edition, than anything else. It's a trick that Konami much used with Zone of the Enders and it's inclusion of a demo of Metal Gear Solid 2, but as the old folks say, use what you got to get what you want. Besides, on it's own, Bulletstorm is good enough to stand on it's own, and it will do a lot more than serve as a good hold over until Duke Nukem Forever, Bioshock Infinite, and other big name shooters are released later this year. Bulletstorm is, in this humble gamer's opinion, one of the first games of 2011 that can be a part of a few game of the year discussions. Any gamer who loves personality in their FPS should give Bulletstorm a shot, because nothing is as satisfying as firing a sniper rifle and catching an enemy square in the rectum for a "Rear Entry" kill bonus.

Posted by Justin LaGrande at 12:21 AM