Dear Konami, We've Been Here Before...

To Whom It May Concern,

You've been around for a long time, and you have given many a gamer iconic moments galore. You made a campy story inspired by old Universal Pictures movies about a guy with a whip venturing into an Eastern European castle to kill a bunch of monsters into one of the most important franchises in all of video games. You let a guy make an action game where being quiet was as important as stopping a mech that fire nuclear weapons from doing so. The accolades go on and on, but they haven't been coming in a really long time. You turned all of your iconic franchises into branding for pachinko machines and microtransaction-laden mobile games. Recently you seemed to want to get back to producing new video games and even published an indie game called Skelattack.

This a very good thing, but it's only one very good thing. You did release the latest game in the legendary Contra series, Contra Rogue Corps, in late 2019, but it really is as bad as many gamers with a much bigger profile than I have said it was. It's muddy, uninspired, and does too much to be something that isn't Contra. I should be upset with you, and in all honesty I am. I am willing to forgive you strictly on the fact that a better Contra game was released in the Summer of 2019. Indie publisher The Arcade Crew released Joy Masher's love letter to Contra Hard Corps in the form of their retro-centric run and gun action masterpiece, Blazing Chrome in July of last year. It outshines Rogue Corps in every conceivable way. It relishes in it's old school look, allowing gamers to bask in it's brutal yet fair difficulty, and it controls as tightly as both 16-Bit Contra titles did almost 30 years ago. 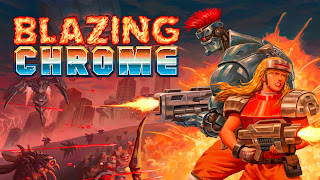 For all accounts, you could have licensed this game and released it as a new Contra game and been celebrated in the same way you were when Arc System Works developed Hard Corps: Uprising all those years ago. You didn't though, and you'll use the apparent failure of Contra Rogue Corps as an excuse to skulk back into the shadows of gaming and use your back catalog to sell pachinko machines. You actually never really stopped. This stands as an indictment of how you pushed us all away and left us all dusting off cartridges and PS1 discs and thinking about gaming before you threw us away, Konami. Honestly, you should be ashamed, but you aren't. You feel no contrition for the treatment you have levied at gamers who have loved your work since the days of Scramble and Frogger. One day you may truly decide to change and treat gamers and the franchises you created with respect, but based on the last Contra game, I'm not so sure.

A Gamer Since Time Pilot '84

Posted by Justin LaGrande at 10:31 AM