This Is The Best Konami Game You Probably Never Heard Of...

I know Konami is an utter shell of its former self, but there was once a time where Konami made magic. Every game they released (with a few exceptions) was an absolute banger. The tragedy in this high reputation is that some of their coolest titles never got released outside of Japan. While some have seen life in other regions because of a number of "Anniversary Collection" releases ported to modern platforms by the fantastic team at M2 and the obscure yet brilliant Getsu Fūma Den has received a second life in the form of a sequel, a shmup masterpiece from 1991 has seemingly been lost to time.

Crisis Force starts with seven monsters who sank the ancient continent of Atlantis awakening to attack Tokyo. This series of events leads to twins Asuka and Maya learning their truth: their archaeologist parents found them in an incubator in a ship belonging to an ancient civilization. This revelation gives way to them learning that they are the key to defeating these monsters and saving the world. The story is pretty generic, but story in games like this doesn't matter much, but as a justification to blow stuff up it's serviceable. The thing about blowing stuff up is where Crisis Force absolutely shines, though. 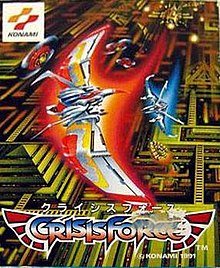 In the "blowing stuff up" department, Crisis Force is exceptional. Unlike other Konami titles, Crisis Force uses a traditional power up system that works much better here than the systems of the systems of their other games, which definitely works better in this much faster environment. Another interesting gameplay tweak is the ability to cycle through and power up three different shot types on the fly (this mechanic will be revisited in Konami's 1992 shmup Axelay) and after collecting a number of blue gems your ship becomes momentarily invincible. This invincibility can be extended by continuing to collect the blue gems and can help put a major dent in any boss' health. If there is a downside to the gameplay, it is probably the slowdown that occurs when too much happens on screen at once. Otherwise, this is easily one of the best shmups we never got in the US and sits alongside Summer Carnival '92: Recca as a masterwork in terms of providing a sense of speed and overall frenetic gameplay.

Crisis Force has one of Konami's best soundtracks. That's saying a lot considering lots of other game soundtracks for their titles in the 80s are some of the most sought after vinyl releases in all of the young but growing soundtrack album collecting space. The music gets you in the perfect mood to do what you're meant to do in a shmup: dodge bullets and blow stuff up. If you can find a physical release of the soundtrack somewhere and are into video game soundtracks, you should totally seek it out.

There was a time when Konami truly rarely missed. Not releasing Crisis Force outside of Japan is an absolute crime. That it hasn't seen a release on any of their classic collections is almost inexcusable. Crisis Force is easily one of Konami's greatest games and definitely qualifies as one of the best shmups you probably never played. Seeking out a cartridge on the Famicom is incredibly pricey and the only reason I have a means to play this on my NES is a multicart given to me last Christmas (Thank you Ariel). I'm a strong proponent of playing things anyway you can, so track down this bit of magic from 1991 and save the world.

Posted by Justin LaGrande at 11:14 AM