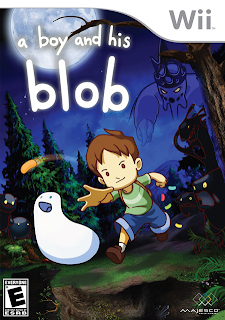 Somewhere in the last decade, it became the norm for most gamers to dismiss the idea that game with "cute" or "kiddie" overtones couldn't be deep, engaging, and fun. This theory was pushed to the back by games like Super Mario Galaxy, but it was brushed off due to it being a Nintendo property, but there are others that have bridged the gap between cute and being a solid game. A Boy And His Blob is such a game, and it pays homage to the NES game of the same name.

A Boy And His Blob starts with a young boy hearing a loud crash outside his window. When he goes to investigate the origin of the sound, he finds a little alien with no discernible shape, or a blob if you will. Upon bringing the blob back to his home, the boy is told of the blob's mission, to save his find a hero to save his home planet of Blobolonia from an evil emperor. He also discovers that the blob likes jelly beans, and reacts to different flavors by turning into different objects. Feed him a tangerine jelly bean, he turns into a trampoline, punch makes a hole, and so on.

This game oozes with old school puzzle/platformer gameplay, a lot like the original NES release of the same name. in addition to the core story, there is also a series of challenge levels that reward players with concept art, trophies, and other goodies. These are all simply thinly veiled bits of bonus content, however, and they neither add nor take away from the game.

Graphically, A Boy And His Blob is beautiful, even when compared to games on more powerful consoles, with beautiful, colorful backdrops and fluid animation. While this game is played using the Wiimote/Nunchuk combo, it doesn't require the gimmicky, forced in motion controls that have plagued the Wii for much of it's history. there's a button for pretty much any task you will have, like calling the blob if you get seperated, or giving the blob a hug to calm it down when enemies fighten it. Yes, this game has a "hug" button, but given how cutesy the graphics are, that shouldn't come as a surprise.

It has been out for a while, and or some reason, there aren't a very large number of copies in circulation, but if you come across a copy, it won't be very expensive. A Boy And His Blob is not only a great Wii game; it's a great game, period. If any retro remake is worth your time, it's this one.

Posted by Justin LaGrande at 10:28 AM