Trojan: One Of Capcom's Toughest 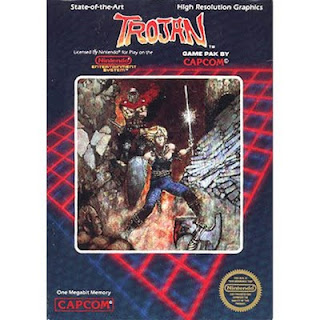 When you ask gamers who cut their teeth on NES games in the 80s about the hardest thing they ever played, they usually say Ghosts N Goblins. Capcom's brutally hard platformer is legendary for being unforgiving, but my some of my ultimate pain moments revolve around another Capcom arcade game turned NES game, Trojan. Trojan is a pretty straightforward side scrolling action game in the same vein as Rush N Attack or Kung Fu Master. It did not have a stand alone button to jumping, but a player would press up on the controller to make the character jump. That could be quite disorienting for players who up to this point were used to having a standard jump button in pretty much all of their games. An interesting new wrinkle inserted into this game was that a few enemies could knock the player's sword and shield away, causing the character to use punches and kicks instead. This adds an extra degree of strategy and difficulty to an already unforgiving game. I mean, I understand that Capcom had this reputation for publishing some bruisers for the NES, but this one as probably only matched by the first Mega Man and Ghosts N Goblins in terms of utter brutality. Because of this, many gamers panned Trojan as a bad game, but I wholeheartedly disagree. Why is this a bad game while something like Battletoads, a game known for being ridiculously hard, is a beloved classic? It's all a matter of perception in my opinion. Battletoads had all manner of marketing goodness behind it, including a cast of colorful, cartoony characters while Trojan was dark, bleak, and foreboding with very little marketing gloss. That's how Capcom did it in the 80s though; they were no frills and their games spoke for them, and Trojan says something very powerful. It's an uncompromising, brutally hard, pretty straightforward game that would pummel any gamer who didn't have the fortitude to stand up to the challenge. Trojan is really easy to track down for a number of consoles, but you can't go into it like you do with many modern action games. Trojan may just break you if you aren't ready for it.

Posted by Justin LaGrande at 10:39 AM