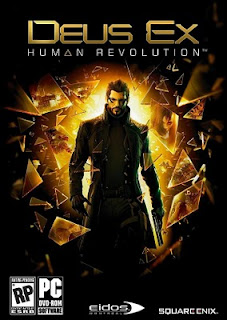 Deus Ex Human Revolution is a follow up to the well regarded title Deus Ex that was released in 2000. That first person action RPG title was noted for its huge environments, dialogue trees, and the ability to approach any situation from a combat or stealth perspective. For the most part, Deus Ex Human Revolution keeps these aspects intact while infusing many modern game enhancements to the classic formula. This game will appeal most to players that enjoy long, complex games that require thinking before shooting.

The plot is a standard humanity vs technology story, but it is executed very well within a steampunk environment.. Character motives are ambiguous at best, and you can freely switch between trusting and disobeying the suggestions that you receive from them. The developers, Edios Montreal, spent a lot of time on the different scenarios that can occur depending on how you interact with an NPC. I'm currently on my second play through and I'm shocked with how much of the game I didn't see the first time around.

A major focus of the technology are augmentations, which are various upgrades that you pick up throughout the game. These augmentations allow you to gain superhuman abilities such as landing from any height without damage, detonating explosive charges, and an invisibility cloak. Each augmentation takes up a separate power bar, which slowly recharges to avoid abuse. You only have a limited number of augmentation slots, so you're forced to choose to fit your playing style.

The graphics and sound are slightly above average, but its really the art direction that leaves an impression. Cities feel lived in, from the citizens wandering about to the detail within each apartment room that you enter. Most importantly, it feels like the city is alive and that things are going on outside of your main quests.

The game is challenging, particularly if you opt for a combative strategy. Enemies can finish you off in no time with their weaponry. The cover mechanic is similar to Gears of War, giving you the ability to quickly switch between cover areas, aim out of cover, and blind fire if an enemy gets close. It's best to pick your shots and play strategically as opposed to run in guns blazing. The game does integrate a regenerating health mechanic, but it takes over 10 seconds to recharge.

I'd definitely recommend this game to players that don't mind spending 20-30 hours on an engaging experience and a fascinating story. Pick this one up!

Posted by Justin LaGrande at 11:22 AM