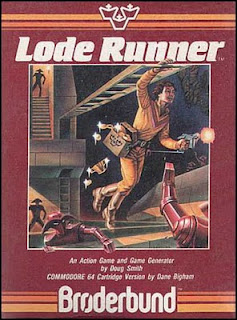 I didn't meet Lode Runner when I was younger, I consider that a personal fail. I discovered it when I was in my early 20s, and it was a great day for my "habit" if I say so myself. I mean, for all the posturing Media Molecule did with regards to the level editing in Little Big Planet, they didn't originate anything. Like a lot of old school gaming innovations, Lode Runner was born in the dorm room of of an architecture student at the University of Washington. The original game was called Kong, and over time it was ported to multiple computer terminals on the campus. The original programmer, Douglas Smith, tweaked his game and eventually started a bidding war between four publishers. The others kinda don't matter, since he ended up going with Broderbund. Lode Runner revolves around a simple enough concept: get the gold and don't get killed. Your character can't jump, and his gun only shoots at the floor making temporary holes in the ground. This might sound like some bullshit, but the game's implementation of these mechanics make for the kind of tension rarely seem outside of games like Resident Evil 4. the only way to beat enemies is to shoot a hole in the ground and get them to fall in. you can conceivably beat every level without killing an enemy. Every gamer who claims to be hardcore in the slightest should check out Lode Runner. it just celebrated an anniversary, so you can find it on XBLA, PSN, and Virtual Console. Collectors can find Lode Runner on pretty much every any major console you can think of. Get that shit!

Posted by Justin LaGrande at 8:19 PM