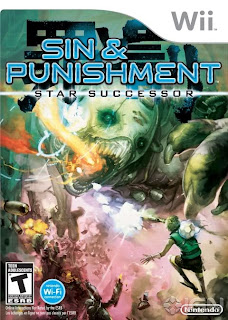 In 2000, Japanese developer Treasure created a masterpiece in the form of Sin and Punishment. The game was a big hit on the Nintendo 64, but never saw light outside of Japan. Many gamers who simply couldn't afford to import Sin and Punishment, but those who could were treated to one of the best pure action games on the N64, or any system for that matter. All hope of playing the game was pretty much gone for me until the announcement that shooter would be available via Nintendo's Virtual Console service. Then compounding on that, was an announcement that Treasure was working on a sequel to be released on the Wii in the Summer of 2010. Sin and Punishment: Star Successor hit store shelves on June 27,2010, and after spending some quality time with the game, I can say with great confidence that THIS GAME IS FREAKING AWESOME!

The story revolves around main characters Isa and Kachi fighting to escape the Nebulox and flee a dying world. The story is not what anybody is playing Star Successor for, you play it for blistering, kinetic action of the highest order. it's not the typical bright, cutesy game you expect to be published by Nintendo, but it features the kind of high production values you expect from a game published by Nintendo. Everyone who has complained about there not being a strong hardcore gaming presence on the Wii haven't been paying attention lately, but I digress.

The gameplay is part Contra, part Space Harrier, part Cannon Spike, and those parts equal something that hasn't been seen on a current generation console. Also, everybody who has concerns about playing a game like this with the WiiMote/Nunchuk combo can rest easy, it handles great in every controller combination. If I have anything to pout about with this game, it would have to be the lack of a true Co Op mode. I mean, the game has two main characters, so I can't really see why a second player couldn't be fit in.

Honestly, this game is a testament to gameplay mattering a lot more than which system it appears on, and it serves as a thank you to those who have supported Treasure and Nintendo over the years. Anybody claiming to be a fan of hardcore gaming should head over to their local video game store and plunk down their money for a copy of Sin and Punishment: Star Successor. If you don't have a Wii, this might be the best possible time to get one since their are a lot of high quality titles coming out this year.

Posted by Justin LaGrande at 4:35 PM