Crysis 2: Better Than That Thing You Saw At The Movies 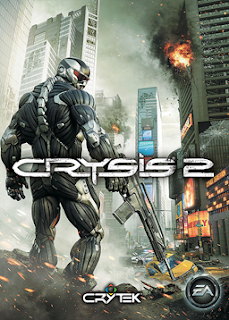 FPS (First Person Shooters) have become a regular in the video game market. We all have played at least one in our lifetime. With such popular franchises as Call of Duty, Halo, and Battlefield, you can sometimes forget smaller FPS series like, Red Faction, Killzone, and Rainbow Six. Sometimes one comes out that exceeds expectations or gives the genre, a swift kick to the nuts. Epic Games’ Bulletstorm did it in February, and now Crytek’s Crysis 2 has done it in March.

You play the game as Alcatraz, a Marine whose squad was wiped out in a submarine attack, and on the brink of death, you are saved by Prophet and are given his Nanosuit (A suit that increases your tactical awareness, as well as your speed, and jumping ability), and the mission to stop the Ceph invasion. Without going into too much detail, the story was gripping. It almost had a movie feel, with the plot twists that happen throughout. Don’t get me wrong, the story is far from perfect, but it kept me more entertained than some movies I have seen.

The visual presentation in this game is fantastic. The fictional New York City comes to life as you play. As you progress through the game, you slowly begin see the city falling apart. Its good to see a building fall in a game, and dust engulfs the entire area around the building. Your Nanosuit’s powers are brilliant to look at. When in Cloak, your gun and arm disappeared with a water-like effect that reflects the light around you, while in Armor mode you get a honeycomb appearance around your HUD. Now everything wasn’t always perfect visually. You did have the occasional frame drop issue at the beginning of some levels, and some character models were stiff, but that wasn’t enough to take away from an already gorgeous game.

Gameplay in Crysis 2 is intense. At any given time you could have bullets flying at you from multiple directions. In most cases you have the option to be stealthy with your kills, or go all Rambo-like with them. When you come to an area, you have tactical options that come up when you look through your visor. Some positions are for sniping, while others allow you to flank your targets. Along with your Visor, you also have the abilities of Cloak and Armor. As the names suggest, Cloak makes you virtually invisible to targets, while Armor increases the amount of damage you can withstand. Both use your suit’s energy, so use them wisely. Basic combat in the game like shooting, running, jumping, and moving are your common button configuration you find in most FPS. Overall the gameplay of Crysis 2 was very smooth and fluent.

Crysis 2 does a lot right. From combat to visuals to story, it all works. It keeps the intensity high without giving you that feeling of helplessness. Your suit powers give a new feel to the FPS experience. Minus the occasional hiccup in the game, it’s not enough to stop me from playing this game over and over. If you haven’t played or even thought about playing Crysis 2 I suggest you give it a try. You might be pleased what you find with the game. ON a scale of 1 to 10 I give Crysis 2 a 9.5

Posted by Justin LaGrande at 7:08 PM