Gauntlet: The Greatest Dungeon Crawler Ever! 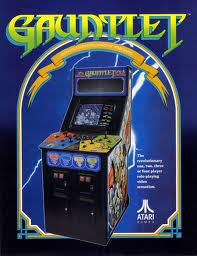 I remember the voice and the phrases vividly. I also remember the ridiculous amounts of enemies. The game I'm referring to is not a rehash of the tired Dynasty Warriors series, nor is it Ikari Warriors. No, it is the legendary arcade game, Gauntlet. Gauntlet was released in 1985 by Atari Games, and was one of the first 4 player arcade games on the market. It was also the first class based multiplayer game, meaning each character controlled a different character type. The types were Wizard, Warrior, Valkyrie, and Elf. Each possessed different strengths and weaknesses, which made choosing the right character more of a decision based on your play style than anything. For example, the Warrior could take and dish out more damage than the Elf, but the Elf could fire his weapon faster and was a lot more agile. The enemies in Gauntlet were the most tenacious I've ever faced in a game. For one, they're spawned from monster generators which if not completely destroyed continue to pump out enemies. They also have a great knack for ganging up on players. It's not uncommon to be surrounded by no less than 20 enemies at a time. Then there's the friendly fire risk. If a fellow player isn't safe, he can whittle your health to nothing. Over the years, Gauntlet has spawned several sequels, with a reboot of the franchise coming through Midway in the late 90s, and the original was reissued as a part of the Midway Arcade Treasures compilation on PS2, Gamecube, and Xbox. The series as a whole has always been great, but for my money, the original will always be the best. There was always something about the tension of that countdown and how characters constantly lose health. Gauntlet was the true definition of a quarter muncher.Who knows if the series will continue, but an HD remix of the original Gauntlet or a special edition similar to Pac Man Chapionship Edition would be great. I do know that "Red Warrior needs food badly".

Posted by Justin LaGrande at 9:52 AM