Sega Dreamcast: Bigger In Death Than It Was In Life 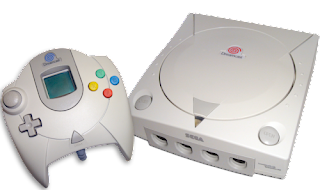 One's potential is only as good as the application of that potential. Whenever I think of that statement in terms of video game consoles, one name always sticks out in my mind, Dreamcast. Sega's final console was never a graphical behemoth, but it is considered a favorite among gamers. When Sega's final console hit American stores on 9-9-99, it was a hit, and players ate up the arcade perfect ports of Crazy Taxi and Soulcalibur, along with the almost Madden killing greatness that was the NFL2K series. They also enjoyed great original games like Jet Grind Radio, and Resident Evil Code Veronica, but something went wrong, and Sega was completely unprepared for the juggernaut on the horizon called Playstation 2. Sony had all the major licensees Sega lacked, and one other major edge, the PS2 also served as a DVD player. This made the Playstation 2 a must have piece of hardware. The Dreamcast, for it's early demise has become a lot like Tupac or Biggie, much more famous after it's death than during it's life. Sega's little white box of joy also originated several things that are now commonalities in current generation consoles. Dreamcast was the first console with a built in modem for web browsing and online play, a first for a console. It's online service, SEGAnet, is essentially an early version of Xbox Live, and players could get downloadable content for their DC by connecting it to a phone line. The homebrew and emulator communities have also gravitated to the Dreamcast because of the ease involved in developing for it, and several homebrew game engines have surfaced, allowing folks to build new games with great ease. One of the things that contributed to the death of the Dreamcast has also kept it alive to this day. it can be pretty easy for a gamer to make an "unofficial" copy of a Dreamcast game for their personal use, thus giving gamers access to the entire library of Dreamcast games. A few years ago, gamers were fed information suggesting that Sega was getting back into the console market, but sadly this was a hoax, and we never got that new Dreamcast. Sega's decision to leave the console market may have been painful for gamers to process, but their parting gift to gamers everywhere proved to be so far ahead of it time that it Sony, Microsoft, and Nintendo are just catching up.