Some Stuff I Want Under My Tree

A few days ago, I did a brief Holiday Buyer's Guide outlining some things you might want to check out. My personal tastes may be a little different, so this post will focus on stuff I want. Neo Geo MVS cabinet - SNK: Those who say arcade and home Neo Geo consoles are completely alike are incredibly clueless. The arcade version, or MVS is a personal choice for me because you can get games for a great deal less than you would have to shell out for the home equivalent, and besides, King of the Fighters 98 feels so much better on an upright cabinet.

Nintendo World Championships reproduction cart - Retrozone: I may never own a real copy of this game, but thanks to Retrozone (http://retrousb.com/) I can get a high quality reproduction of that game, along with a lot of other great homebrew NES games. 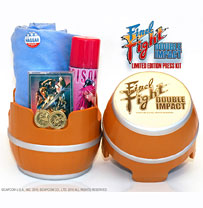 Intelligent Qube - Sony Computer Entertainment: Most gamers remember this from the demo disc that came packed in with the PS1, but those who got their hands on it were keepers of one of the treasures for that system. If anybody has a lead on a complete US copy, I would be in your debt.

Resident Evil 4 Chainsaw Controller - Capcom: It was released when RE4 launched on GameCube and PS2, and while I probably would never use it as an in game controller, it would be great for my collection.

Samurai Zombie Nation - Meldac: It's not a very good game, but the utter strangeness of this game combined with it's rarity makes me want it even more. It would be quite the happy dance moment if this was in my NES collection.

A custom MAME cabinet: Everybody who knows me knows that this will be an upcoming project for me. The only thing I have left to figure out is will it have a built in monitor or not. Oh, and mine will be much cooler than the one in this pic.


That pretty much all the stuff I would want if my friends were all rich gamers and had no issue buying me games for Christmas.
Posted by Justin LaGrande at 9:49 AM