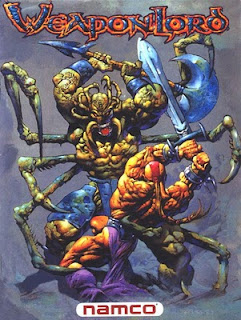 I remember the first time I ever saw the terms "Namco" and "Fighting game" in the same sentence. It was an article in Gamefan magazine about a weapons based fighting game being developed by the future developers of Tekken and Soul Calibur. The game was called WeaponLord and it was being developed for the Super Nintendo and the Sega Genesis simultaneously. Everybody who heard about this game, including myself, were extremely excited about the potential WeaponLord contained. When it was released, it received great reviews, and sold well, but some gamers went into the experience of that game expecting something similar to Samurai Shodown, which was the other notable weapon based fighting game on the market. WeaponLord took a very serious approach to combo based gameplay, where there was literally no chance of success for gamers who tried to button mash through matches. This put off a lot of novice players, but was a great relief for those who took pride in mastering the strengths and weaknesses of each character. The only thing that kept gamers from getting a legit sequel to WeaponLord was the end of the 16 bit system generation. Namco still owns the rights to WeaponLord, and for all intents and purposes, we could see a remake of that classic game, with updated controls and graphics. There would be no need to mess with the combo system, especially since a lot of those mechanics are still being used in the game industry today.If you decide you want to go a few rounds with WeaponLord, you can find it online at a great price, in most cases, around $5.00.

Posted by Justin LaGrande at 11:45 AM