Shadow Of The Colossus or Lil Man Is Tougher Than You!! 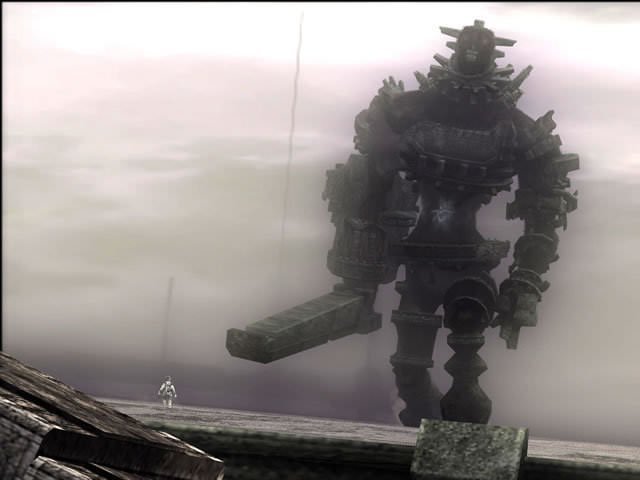 I was supposed to be writing a post about Shinobi, Sega's 1987 Ninja classic, but I was hit with writer's block. The blank my mind began to draw was colossal...wait a minute...Colossus, that's it. My mind began to open up as the last blog post faded away, and this new one takes shape.

Anyways, I remember when I was introduced to Shadow of the Colossus, and how it started out as an afterthought. It was a few months after Hurricane Katrina, and I was still trying to piece together the normalcy of my life. I went into a Gamestop in Monroe, LA, and bought a copy of Katamari Damacy, so I could have this much needed distraction, and just before checking out I asked the guy at the register what they recommended. They started raving about Shadow, and being a gamer who will try anything once, I bought it as well. When I popped it into my PS2, I was blown away graphically. I also felt a strong bit of familiarity since this game was developed by the same team that created the incredibly beautiful and criminally underrated ICO. The game starts with an anonymous young man riding a horse into a temple. When he gets there, the young man, whom I will refer to from here on as "Lil' Man", he places the motionless body of a young woman on an altar. From here, a mysterious voice tells Lil Man that if he wishes to bring the girl back to life, he must defeat the 16 Colossi that make up ancient demon named Dormin. You are also informed that your sword will guide you to each creature. from here, you are sent on the way to kill each beast, but you are never informed of the size of each monster. When I saw the first Colossus, it literally made me go "oooo", it was that big. Since the object of Shadow of the Colossus is to kill the 16 Colossi that inhabit the game world, it isn't muddled down by silly little side quests or fighting enemies that don't really fight back, but your experience is nonetheless a fulfilling one. Shadow can feel quite linear, but when each Colossus is a completely different experience to fight, then it never feels stale. My favorite moment of the game had to be the first time I fought the "bird" Colossus. having to crawl across its back while avoiding your grip meter running out was a great challenge, not as tough as say, the "turtle" Colossus, but tough nonetheless. Of all the games I've gotten since I seriously focused on building my PS2 library a few years back, Shadow was probably the best use of minimal story I've ever seen in a seemingly story driven game. Oh yeah, I forgot to mention that Lil Man gets no power ups during his quest, save for eating fruit and lizard tails to build up health and grip. All he has is a sword, bow and arrow, and a horse named Agro. The battles get so epic at points that Lil Man has to be put on the list of great game heroes with names like Link, Simon Belmont, Solid Snake, and Kratos. The difference between him and other characters is that get lots of different supplies at their disposal, while Lil Man only has two weapons. So I say this, Shadow of the Colossus is one of the best games of the last decade, and Lil Man is the realest character ever.

Posted by Justin LaGrande at 9:50 AM