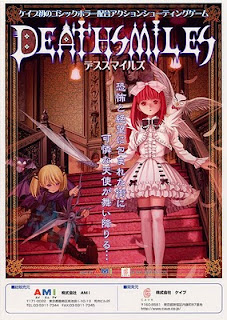 There's something about a good shoot em up that makes me feel really good about being a gamer. It seems some of my favorites are extremely Japanese and extremely well paced, despite how much stuff is on screen at one time. I mention the amount of stuff on screen because shoot em ups have undergone a change over the last decade, and the on screen bullet count has gone through the roof. This is especially true of Japanese Shooters, which are as popular as they have ever been. Of the developers of these games in Japan, Cave stands almost head and shoulders above everyone else. They're almost like SNK used to be with fighting games or EA is with their sports game line. So imagine my utter excitement when one of Cave's more popular shooters, Deathsmiles, was given a US release. What was my opinion of Cave's first American console release? Keep reading and I'll be more than happy to tell you.

The U.S. version of Deathsmiles is a side scrolling shooter(also a rarity for Cave) set in in a gothic environment. There are a lot of ghosts, ghouls, and all manner of occult beasts to fight off, and they all dump lots of bullets at you. Boss fight range from manageable(Deathscythe), to the tough(Bavaria), to one that will make fans of Earthworm Jim burst into tears laughing(Mary, The Giant Cow). Thankfully the game gives mercy to those afraid of the possible body count by including multiple difficulty levels. All of the playable characters(four in standard versions, five in the Mega Black Label remixes) all handle well, while each has specific attacks. Each character also has a familiar that fires a secondary weapon at enemies, and that familiar handles differently between standard and Mega Black Label editions of the game. If I have confused anyone with the terms standard and Mega Black Label, don't be. The American version of Deathsmiles contains an Arcade mode, Xbox 360 mode, and a revised version called Version 1.1, but there is also a completely remixed version of those that is called Mega Black Label. For those who aren't familiar with this game in Japan, Cave released an extremely limited edition of Deathsmiles entitled Mega Black Label, and those versions of Deathsmiles were included with the version of Deathsmiles released here. Also to entice gamers to pick up a copy, Cave and Aksys saw fit to release Deathsmiles in standard and collectors edition. With the collectors edition giving players a soundtrack disc and an Xbox 360 faceplate for their extra $10. I'd consider $40 for the collector's edition to be a pretty good buy, especially if you consider yourself a collector of video games.

All in all, I love Deathsmiles, and consider it to be one of those shoot em ups that might end up flying below the radar like Axelay did when it was released on Super Nintendo years ago, but like any truly great video game, Deathsmiles will stand the test of time, and will probably be beloved long after the system it was released for has suffered from the Red Rings for the final time.

Posted by Justin LaGrande at 9:26 AM