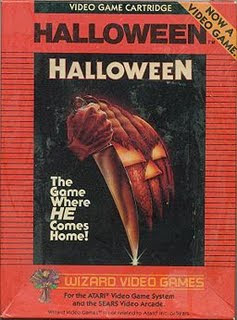 Horror movies have long been inspiration for video games, and the popularity of Reside

nt Evil, Silent Hill, and other games. In the early 80s, there was no real quality control protocol with regard to what was being released for the different game consoles. Therefore, a lot of random games based on very random things were released. In particular, Wizard Video released two games for the Atari 2600 based on Halloween and The Texas Chainsaw Massacre. Both games are considered both groundbreaking and utter pieces of trash. They were groundbreaking because of the level of violence portrayed in each game, but from a gameplay standpoint neither game is as bad as E.T., but they pretty bad. Texas Chainsaw Massacre is notable because the player takes control of Leatherface and is charged with the task of catching victims and killing them, while Halloween features a playable character that can be decapitated by Michael Myers. Both of these games were deemed unfit to sell with the typical 2600 games, so they were kept behind counters and only taken out on request(much like the porn games I discussed in an earlier post). Wizard video stopped making video games not long after the crash of 1983, but bad video games based on Horror movies continued to see the light of day. The rise of the NES saw many new publishers pop up in an attempt to release games based on movies. One such publisher who released a myriad of games based on any and every license they could was Acclaim, and under their LJN brand, they released games based on two iconic horror characters in Freddy Kruger and Jason Voorhies. Friday The 13th has been considered by all

accounts one of the worst games released in the 80s, which is saying a lot. The pacing is terrible, the game's internal clock is poorly set up, and Jason's difficulty as a boss character leaves a lot to be desired. There are some, however who love this game, but then again, some folks like to have illicit encounters with farm animals. The game adaptation of A Nightmare On Elm Street wasn't as bad as Friday The 13th, but it was still pretty bad. Hit detection was off, some of the platforms suffered from invisible edges, and some of the enemies were simply broken. A Nightmare On Elm Street had a pretty good layout as far as game level design goes, but glitches with enemies made that game a pile.

There were other games based on Horror characters, mostly based on other established horror characters, like Castlevania, which featured a cast of well known horror movie creatures. Most of those were no where near as bad as the ones mentioned in this post, however. Michael Myers, Leatherface, Jason Voorhies, and Freddy Kruger deserved much better than they got from the video game industry, but in many ways, those games caused nightmares for those who played them. Maybe that was the point the whole time.

Posted by Justin LaGrande at 10:01 AM