Ice Climber: It's Cold Up There 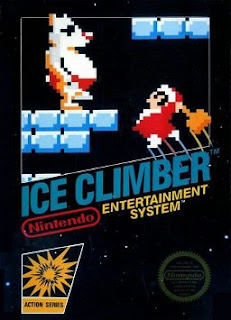 It's been really cold this winter, and for some utterly obvious reason, when I think of cold, I think of ice. Now when I think of ice, as a retro gamer, the first thing I think of are these two little guys busting through floors of ice trying to climb mountains, all in an effort to escape the mountain and take back your vegetables from a condor. If this all sounds strange, then you obviously never played Ice Climber for the Nintendo Entertainment System. The 1985 platformer was for some reason one of my favorite games on the system for a long time, and it remained so until Kid Icarus was released in 1987. In Ice Climber, the player assumes the role of Popo, while during a two player game, the second player controls Nana, in a race to the top of the mountain. Along the way, Popo and Nana face Polar Bears, ducks, Yeti, and gravity as they ascend the 30 different mountains in the game. As with most old school arcade games, the difficulty can be a tad bit brutal, but by no means is it manageable. Ice Climber is one of those games that on the surface feels simple and shallow, but if a player takes a chance on it, they'll find an excellent action platformer with a great challenge.

Oh yeah, I forgot to mention that Popo and Nana have been inserted to the Super Smash Bros. games to a great level of popularity.

Posted by Justin LaGrande at 10:40 AM