Jim Was Almost As Big As Mario and Sonic...Almost. 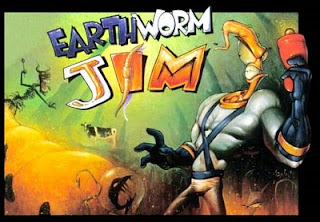 David Perry is a name most gamers nowadays don't recognize, but in the mid 90's, he was responsible for one of the most exciting, personality laden video game experiences ever. You see, Perry was the head of Shiny Entertainment, and their first major project was a little game called Earthworm Jim. Now, any gamer worth their salt knows the principles in the minimalist storyline for Earthworm Jim, so I won't get too deep with it. Let's just say it's a variation of the classic hero saves damsel in distress storyline that was done to death in video games. It's was just done with such an amazingly goofy flair that I still stand up and applaud the game's ending cutscene(if you want to check that out, you can easily find it on youtube).

As the game's title suggests, you control Jim, an earthworm who crawls into a super suit that gives the worm almost human intelligence, super strength, and other powers. Jim's quest to save Princess Whats-Her-Name leads him through worlds inhabited by all manner of weird crap out to kill Jim. For example, one of the boss fights involves a goldfish with an army of overly muscled cat slaves, while another was a giant blob of snot called Major Mucus. The characters aren't the only thing that get major praise for originality. In the sequel to Earthworm Jim, Jim takes the form of a blind cave salamander as he travels through the intestinal passages of a larger creature.

Shiny wasn't known for pumping out a lot of games, but the ones they made were great. They started with the Earthworm Jim series, and continued with Wild 9 on the PS1. 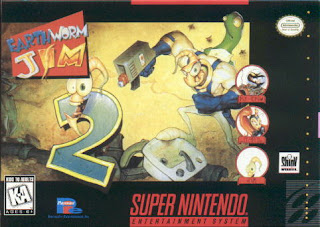 they were also responsible for that turd Enter the Matrix, but I'd prefer to forget any game they developed after 2000. I look at Shiny's Earthworm Jim games like I look at the 16 bit Sonic the Hedgehog games...when they were on, they made some of the best video games around, but when they fell off, oh man.

Posted by Justin LaGrande at 11:32 PM