Stretch Panic: It Might Be Too Weird For You 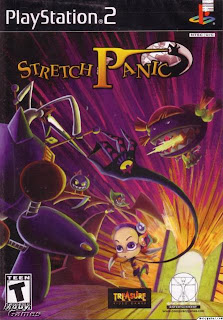 So, I figured I wanted to touch on a really "different" game in my collection that some of you probably have never heard of. So I started looking...and for a minute, nothing stuck out to me. Nothing, that is, until I remembered Stretch Panic nuzzled gently against Alien Hominid on my game shelf. You might say, "What about Katamari Damacy?", but Katamari isn't that original. It was basically a lot of item collection and took major inspiration taken from games like Super Monkey Ball and Marble Madness. Stretch Panic, however was a platformer where the player had to play with the level's elasticity in order to traverse the landscape. It could be frustrating to folks not into thinking out of the box with their video games, and Stretch Panic didn't sell particularly well, but I dig it.

Stretch Panic puts players in the role of a little girl who is essentially a punching bag for her sisters. Each sister has some bad habit that reminds me of the seven deadly sins. Anyway, a box is delivered to their house, and the older sisters tear into the box. The box releases a demonic presence into the house, and transforms the sisters into monstrous creatures. being knocked away from the box, the little girl is not affected, but her scarf is. The scarf becomes possessed (kinda like the guy's hand in Vampire Hunter D), and becomes her weapon against the demons that have invaded her house and stolen her sisters.

The first time I played this game, it stuck in my mind because of the first enemies you fight. When you land in the first level, you are confronted by a group of women with breasts bigger than their bodies. They moved slowly, and if they fell, they would use the boobs like helicopter blades to fly back to their position. To say the least this made Stretch Panic a cult hit among people I know who played it, and was forever dubbed, "The Titty Game". I'll let that giggle you just developed settle for a moment before I continue.

All in all, this a fun game, but it's not for those without imagination. If all you're into as a gamer is what somebody told you is required gaming, then this isn't your cup of tea. If, however, you can get with a little girl fighting off crazed demons with a possessed scarf, then Stretch Panic might be a good fit for you. I'm more than certain you can find this game cheap, since I got it it brand new around 2005 for under $20, so there's no real excuse to miss out on it.

Posted by Justin LaGrande at 9:59 AM