Metroid: Other M Is A Must Play, But That Is Clearly A Matter Of Opinion. 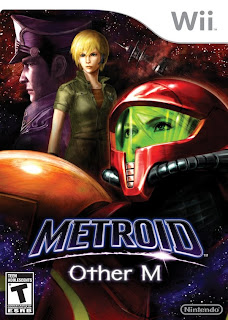 Samus Aran has been around since 1986, but she's held up incredibly well over the years. The gaming industry's first major female protagonist starred in 10 games over the years, but none of those previous games was as controversial as her latest adventure. The 11th game, titled Metroid: Other M, is a joint developmental effort between Nintendo and Tecmo's Team Ninja. Team Ninja is best know for it's Dead Or Alive and Ninja Gaiden games, and their games are typically far more "mature" than those of Nintendo. Early previews of Other M showed off a game with a grittier feel than previous games in the series, as well as a bigger emphasis on story than ever before, and of course, message boards went crazy with speculation on how the game would turn out. As Other M neared release, though, many media outlet decided to fuel gamer fears by letting the world know that Team Ninja butchered the story in Other M, that Nintendo screwed up the controls because the game is controlled by using the Wii Remote only, and other concerns that effectively told gamers that Other M was a pile of garbage that should be avoided. The thing about so called video game journalists, though, a lot of these outlets have bashed any and everything released on the Wii, while lauding praise upon far worse games on the 360 and PS3 (Bayonetta anyone). Is Metroid: Other M perfect, no, but is it a very, very good game? Yes, and not just by Wii standards.

If you line up the games in the Metroid canon in chronological order, Other M takes place just after the events of 1994's Super Metroid, which makes it the last game in the time line. When things start up, Samus is recounting the final battle between her and Mother Brain, which resulted in the death of the last Metroid. Samus is debriefed on her mission and allowed to go on her way, but her peaceful ride through space is interrupted by a distress call that she refers to as "Baby's Cry" and she rushes off to investigate the call, which is originating from a research facility called the Bottle Ship.

Turns out, Samus' old unit in the Galactic Federation is also investigating the call, and Samus finds herself back under the command of General Adam Malkovich, which explains the way Samus acquires new weapons. Because of the instability of the Bottle Ship, some of Samus' weapons could harm the other humans on board, therefore, Malkovich authorizes the use of new weapons as needed. This was a story point that was maligned by other reviewers, but it makes perfect sense in the scope of this games story.

The rest of the story unfolds through a series of well put together, yet occasionally long winded cutscenes. The story does a good job of injecting some actual human vulnerability into a character that has been a stoic ass kicker for more than 20 years. To say that Samus is whiny is an extreme overstatement, and if anything, she seemed kinda dry in small bits. That had nothing to do with the character and more to do with the voice actor.

with Story basics out of the way, it's time to get to the meat and potatoes of why gamers spend money: gameplay. A lot of people were concerned with the Wii Remote only controls, but I'm glad to say, the controls are very responsive, and I was able to jump into the game with very little in the way of a learning curve. Switching from standard gameplay to first person "Search View" also felt quite natural, as long as your Wii Sensor Bar isn't obstructed by random crap. Fighting enemies is fast paced and even though the game has a built in auto aim, there are enough enemies on screen at once that there is still a lot of challenge.

All of the weapons and special maneuvers from Super Metroid return for this game. Even the Shinespark returns without the energy penalty for use of the move. One major note is the Power Bomb. you don't acquire the weapon until very late in the game, and since so many rooms early in the game require the weapon, multiple playthroughs will be a must.

One thing players will notice about this game that wasn't present in previous Metroid games is a definite upturn in terms of Samus' aggression when it comes to dispatching enemies. Samus now has an Overburst move that cripples enemies, preparing them for all new "Lethal Strikes" which often spell death for any enemy that receives one. Another major gameplay tweak is that players no longer have to hunt for health and missiles. By holding the Wii Remote vertical and holding A, Samus will regenerate missiles, and if she's about to die, she will regenerate a small portion of her health as well. This makes boss battles even more frantic affairs if a player is on the verge of death.

I admittedly went into this game with a bit of trepidation, especially after the vicious review that G4's XPlay gave the game, but I learned a long time ago that nobody should pay attention to one review only, even if I'm the author of said review. This game has proven to be one of G4's most controversial review, and it proved that opinions are truly like assholes. In this gamer's humble opinion, most fans of Metroid who played more than the Prime series, will be quite pleased with Metroid: Other M. If you're skeptical, this game is as good a reason as any to get a Gamefly subscription.

Posted by Justin LaGrande at 5:34 PM