Kabuki Quantum Fighter: He Whips His Hair Back And Forth 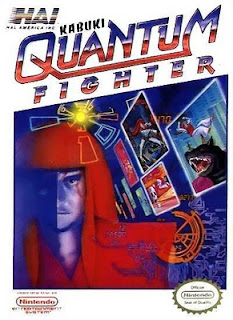 One of my favorite movies is Tron, the Disney Epic about a programmer sucked into a computer network. While the video games based on that story were okay, they never fully got my attention. However, in 1990, Hal Laboratory released Kabuki Quantum Fighter for the NES, and while it played off some elements of Tron, the absurd coolness of this game was completely original.

The story focuses on a defense computer that has been corrupted by a virus. This virus intends to essentially enslave humanity by taking over all weapons systems. in an effort to stop the virus, Scott O'Connor volunteers to have his mind converted into raw binary data and dropped into the computer system to combat the virus. What made this even stranger is that when he is re imaged in the computer system, he takes the form of one of his ancestors, who was a Kabuki actor. See, I told you this game was weird. I'm just trying to figure out how this dude with an obviously Irish name, who isn't said to be even partially Japanese, is the descendant of a Kabuki actor. This is a video game, though, so the plot doesn't need to make much sense.

As far as gameplay goes, this is a run of the mill side scrolling action platformer. Like most side scrollers on the NES, it's the little things that make it special. O'Connor's basic attack is a hair whip. Yes, you read that correctly, he whips his hair back and forth like Will and Jada's daughter. He also uses several projectile weapons that are typically upgraded when you defeat a boss. One thing that makes this game kinda easy is that if you are low on health, you can pause the game and transfer ammo from your projectile weapon to your health bar. If you don't use a lot of ammo during levels, this can be a godsend during tough boss fights.

Kabuki Quantum Fighter is a dope game, but it can be a tough game. This certainly isn't a game you'll beat in 45 minutes like Ikari III, but it's a lot more forgiving than Ninja Gaiden. In a lot of circles, it was compared to Batman on the NES, which is really good company. You can find lots of copies on Ebay for under $10, so there honestly is no reason to not get your hands on a copy of this game.