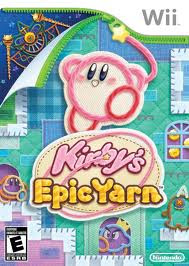 Nintendo has a knack for taking characters that should only appeal to little kids and dropping them into great games that appeal to gamers from all walks of life. They've been doing it since the early 80s, and I honestly don't see it slowing down anytime soon. Even when they've come under fire for abandoning its core audience in favor of casual gamers, Nintendo answered back with games that could be qualified as classics. 2010 has been an interesting year for Nintendo with the release of several big games for their console, all aimed at turning around that casual games image that Nintendo was stamped with early in the Wii's life. The latest of these games is Kirby's Epic Yarn, and I can honestly say, this games is an absolute joy to behold.

The game starts off with a great cutscene that starts in normal cartoony style, and as usual, Kirby is hungry. His hunger leads him to eat a tomato that belongs to a sorcerer. The sorcerer casts a spell on Kirby that pulls him into a tube sock hanging around the sorcerer's neck. This sock, strangely enough, is a portal to a world called Patch Land. when arriving in Patch Land the new art style kicks in, and makes the observation that the ground "feels like pants". Kirby also realizes he can no longer use his traditional vacuum ability in this new world. He can, however transform into a multitude of vehicles and animals, which he immediately does to rescue Prince Fluff from a monster. Fluff explains that the same sorcerer that trapped Kirby is the same one that has stolen the magic yarn, therefore unraveling the pieces of Patch Land. Kirby agrees to help, and this is where we take over.

Epic Yarn is as old school inspirit as you'll find in a modern video game, and it ranks with New Super Mario Bros. and Battle Kid as one of the better modern platformers around (writer's note: you owe it to yourself to play Battle Kid. It's a great reason to buy an NES, but man is it tough.). With the exception of having to occasionally tilt the Wii Remote to aim a projectile, it pretty much works like an NES game. During the game, Kirby will encounter some inventive bosses, which must be tackled in different ways. Getting to those bosses is a blast with Epic Yarn sporting some of the best level design in a platformer in a very long time. There are a variety of hide and seek challenges, where you'll have to navigate a level and find a hidden character at the same time, collecting unlockable content, and some great level manipulation involving the patchwork arts and crafts game design that all blend to make this game a lot of fun to play whether in single player or two player co op.

If I had any gripe with Epic Yarn, it would be that the game is a bit on the easy side. You never die during a level, but you will lose beads, which will cost you in terms of completion percentage. the lack of ridiculous difficulty did not diminish the game's overall appeal, though. I mean, if I wanted to feel pain on my Wii in a great game, I'd play Sin and Punishment: Star Successor. All in all, Kirby's Epic Yarn proves that even in this day of Modern Warfare and Halo. The Wii has had a lot of solid releases this year, and this one can be added to the list.

Posted by Justin LaGrande at 10:07 AM