Random Gaming Factoids...This Stuff May Pop Up On Jeopardy 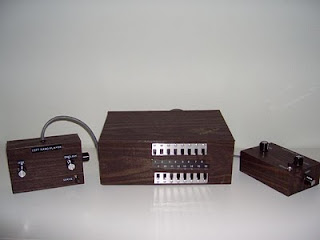 I was recently shuffling through IGN.com and came across a list they compiled of the top 25 game consoles of all time. I found it funny that the three current generation consoles were all on the list. I also found it peculiar that the Magnavox Odyssey, which is the first home gaming console, was at the bottom of the list, while the Wii, PS3, and Xbox 360 were much higher. The fact that the Odyssey even exists should have it higher than say, the Atari 5200 was on this list, but what am I ranting about, at least the Odyssey was on the list, along with the Sega Master System, which felt superior graphically than the NES. I'm probably rattling off systems that many of you never heard of, so I guess I should do the right thing and inform you, the reader, on not only some systems you may not know about, but also give you some backstory on a few of them.

Before the Nintendo Entertainment System, Intellivision, or Atari 2600, there was the Magnavox Odyssey. It may have been nothing more than variations of Pong with screen overlays, but in 1972 when it released, it was truly something special. It beat the home version of Pong to market by three years, and the 1968 prototype of the system which is called "The Brown Box" now sits in the Smithsonian Institution's National Museum. So, if you're a gamer, you owe a debt of gratitude to Ralph Baer, the creator of the Odyssey.

When the assorted wannabes that would eventually follow Pong to market surfaced, one of the main producers of these clones was Nintendo. They released several Pong clones in their Color TV Games series before transitioning to Arcade games, the rest of that story is history.

Most younger gamers don't know this, but the 3DO Interactive Multiplayer(that was the official name of the system) was an attempt by EA founder Trip Hawkins to create one medium that the entire video game industry would adopt. That didn't quite work out, especially when The 3DO launched with an $800 price tag. Anybody who ever heard this story about Hawkins' attempt to monopolize the video games industry wasn't surprised when the juggernaut got exclusive rights to produce games using NFL teams and players.

Contrary to popular belief, Sega was not started in Japan, but Hawaii, and they created The SG-1000 and the Sega Mark III before the Sega Master System saw the light of day in America.

There was a second manufacturer of the original model NES. If you ever stumble across a Mattel version system, you have found of the truly gems in Nintendo history.

That's all I got right now. If you can think of anything else, let me know. Also, if any of my info is incorrect, let me know so I can find the correct answer.
Posted by Justin LaGrande at 2:47 PM